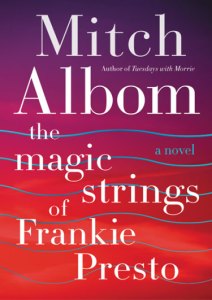 Mitch Albom reates his most unforgettable character—Frankie Presto, the greatest guitarist ever to walk the earth—in this magical novel about the power of talent to change our lives.

In Mitch Albom’s epic new novel, the voice of Music narrates the tale of its most beloved disciple, Frankie Presto, a Spanish war orphan raised by a blind music teacher. At nine years old, Frankie is sent to America in the bottom of a boat. His only possession is an old guitar and six magical strings.

But Frankie’s talent is touched by the gods, and it weaves him through the musical landscape of the twentieth century, from classical to jazz to rock and roll. Along the way, Frankie influences many artists: he translates for Django Reinhardt, advises Little Richard, backs up Elvis Presley, and counsels Hank Williams.

Frankie elevates to a rock star himself, yet his gift becomes his burden, as he realizes that he can actually affect people’s futures: his guitar strings turn blue whenever a life is altered. Overwhelmed by life, loss, and this power, he disappears for years, only to reemerge in a spectacular and mysterious farewell.

With its Forrest Gump–like journey through the music world,The Magic Strings of Frankie Presto is a classic in the making. A lifelong musician himself, Mitch Albom delivers an unforgettable story. “Everyone joins a band in this life,” he observes, be it through music, family, friends, or lovers. And those connections change the world.

~Bestseller Tuesdays with Morrie, the bestselling memoir of all time.~His first novel, The Five People You Meet in Heaven, was an instant #1 New York Times bestseller, as were For One More Day, his second novel, and Have a Little Faith, his most recent work of nonfiction. All four books were made into acclaimed TV films. Albom also works as a columnist and a broadcaster and has founded seven charities in Detroit and Haiti, where he operates an orphanage/mission. He lives with his wife, Janine, in Michigan.

I entered to win the book and wanted to attach links.  This is on my TBR page.  I just

watched the movie The Five People You meet in Heaven and not sure how I feel.  I

tend to like books more than movies.  Don’t yu??

(Somewhat) Daily News from the World of Literary Nonfiction

I seek the truth.

You are braver than what you believe.

I want to be rich. Rich in love, rich in health, rich in laughter, rich in adventure and rich in knowledge. You?

I Solemnly Swear I Am Up To No Good

BY GRACE THROUGH FAITH